Evaluate the claim that tradable permit schemes are the most effective policy for correcting environmental market failure.

Tradable permits are a good approach to solving the problem of rationing of various resource types and many nations have adapted to this method (Tietenberg, 2006).). For example, a survey by OECD (2002) showed that there were nine applications of trade permits in controlling pollution of the air, fisheries had seventy five applications, water resources management had three applications, water pollution control had five applications while control of using land had five applications. In economics, the biggest problem is the economic problem of managing scarce resources in order to fulfill the limitless needs and wants and as such resource management is vital in any economy (Sloman, 2011; Carbaugh, 2006; McDermott, 2003). Tradable permits like the above examples given have been faulted by many practitioners in terms of how wealth gotten from these resources are allocated, externalities and although they do not make the resources private, access and usage of the resources are limited (Mc Cay 1999; Tietenberg, 2006). Thus instruments that are based on the markets are used to reduce over usage of resources.

Indeed tradable permits are used to correct environmental market failures although they are not supported since they limit resource use. Most markets are not perfect and are bound to failures in terms of efficient resource allocation which means Governments must intervene in the markets (Sloman, 2011). Some of the environmental market failures are negative externalities for example loss of welfare, pollution etc., distribution that is unequal for example global warming, monopolists etc. Government intervenes in markets in the following ways environmental taxation, regulations on pollution, permits on pollution, property rights etc. and to some extent, these interventions are supported since if firms are allowed to exploit resources and let forces of demand and supply to allocate the said resources, in efficiencies will occur and exploitation s will increase. IMF (2000) posits that economic instruments have emerged as tools for managing the environment and coming up with policies related to environment.

A good example is the taxes on pollution and general environment taxes which are put in pace to curb damage to the environment and society. Production of some goods and giving some services results in increased costs to the society which is so divergent from the market prices (Freebairn, 2009; Sloman, 2011). Such costs are damage to the environment through resource over-exploitation and pollution hence taxes tend to rectify this. In addition, pollution permits that are marketable and taxes related to pollution and instruments that depend on signals in prices and incentives which signal the polluters to reduce the societal costs (IMF, 2000). In essence a charge per each unit of emission is imposed that sends signals to the polluter to reduce emissions to a level where loss or profit owing to a reduction in emission equals the damage brought to the society. Permits are imposed and which are tradable such that the tradable permits through price mechanism establish an emissions price determined by the markets that signals costs of damages which like taxes leads to reduced emissions as a financial incentive (IMF, 2000; Freebairn, 2009). This assumes that problems that arise due to enforcements will not arise or have been taken care of. 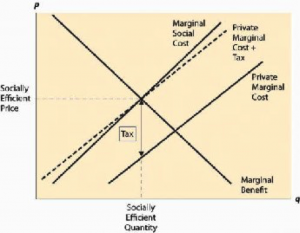 The above figure 1 shows that taxes imposed leads to adjustment of private costs which then equals marginal social costs and this enables the socially efficient quantity to be achieved or else lack of taxes will reduce private costs leading to increased private production at the expense of marginal social costs leading to environmental market failures.

In addition, one environment market failure that could be corrected through tradable permits is changes in the climate which often leads to several failures in the market like negative externalities like pollution, poor or in adequate information, incentives that are minimal, problem of viewing the environment as a shared resource, factors of production like land which are immobile among others which leads to resource misallocation and lack of societal welfare maximization (Sloman, 2011; The Guardian, 2012). Such failures leads to Government intervention, compared to a first-best world which has only one failure in then market to handle, environment policies must be designed to address several market failures.

Thus, the environmental market correction that results from tradable permits are a way or sending signals to the emitters to reduce emissions as an incentive to reducing their costs. In essence, taxation on pollution and environment are used specifically to increase private production costs until it is equal to the costs to the society (social costs) to reach a market price and quantity that is at the optimum. Such taxes ate used for cleaning up and investing in advanced technology which lowers environmental impacts for example clean energy. In the UK, such taxes are charges on congestion, tax on landfill, duty on fuel etc. Some regulations are for example “Environmental Protection Act of 1989” of the UK. 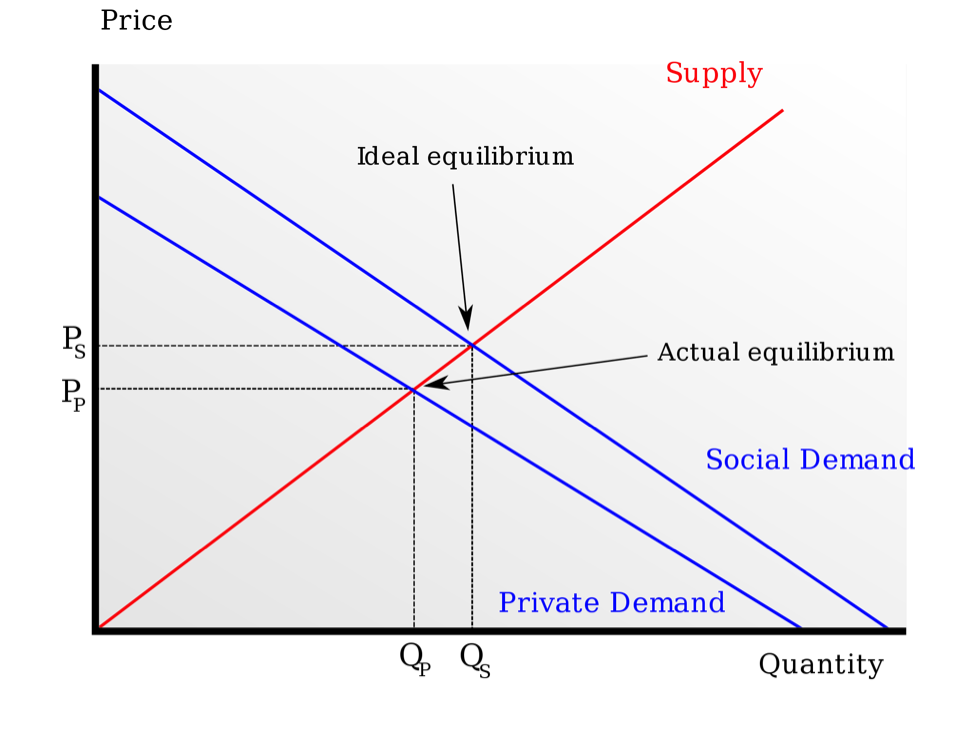 The above figure 1 shows that the ideal equilibrium is whereby private costs equals social costs or the social demand is met.

Without looking at enforcement policies, tradable permits assist in correcting environmental market failures by increasing private costs through mechanism like taxes so that the optimum price and quantity is reached. Taxes and other regulations are an incentive to reduce emissions since it is treated as an accounting cost.

McCay, B. J. (1999). “Resistance to Changes in Property Rights Or, Why Not ITQs?” A paper presented to Mini-Course, FishRights 99 at Fremantle, Australia, November 1999.

The Guardian, (2012). Why do economists describe climate change as a ‘market failure’? Available at http://www.theguardian.com/environment/2012/may/21/economists-climate-change-market-failure?newsfeed=true. Accessed on 11.01.2015