Market efficiency means that all players in the market have full and perfect information which helps them make timely and informed decisions especially on pricing. This then implies that all participants have full information to make timely decisions about investments, buying and selling. As such, an oligopoly market which is a market with few sellers and many buyers (see Griffiths and Wall, 2011; Sloman, 2011; Mankiw, 1990) should be made contestable in order to be efficient. But is this possible bearing in mind few sellers could have more power for example in determining the prices to be charged in a particular market down playing the forces of demand and supply? To some extent, an oligopoly market needs more thinking strategically compared to other market structures like monopolies or perfect competition where sellers are faced with a well outlined demand curve for the outputs and quantity is chosen where MR=MC. In an oligopoly, sellers are big and can influence the market

Thus, contestable markets come into play to somewhat control the forces from suppliers. Contestable markets a theory linked to William J. Baumol can be seen as markets which barriers to entry are non-existent or are low which includes lack of sunk costs when a firm is making an entry into the market (Baumol, 1982; Martin, 2000). Baumol (1982, p. 3-4) observes that a contestable market is where entry into the market is free, little or no cost at all and a new entrant is not disadvantaged in any way and can be described as hit-and-run markets. So, oligopoly markets exist because the barriers to entry into a market are high which prevents other firms from making an entry in the market to share in the supernormal profits earned by the existing players. Thus, oligopoly markets will exist as long as some suppliers or firms collude to form cartels that prevent others from entering the market leading to charging higher prices and exploiting the consumers. This then hampers market efficiency and requires the intervention of the government to control such forces.

In addition, when the barriers are removed (profits can be determined in advance, no costs including sunk costs), new entrants enter the market freely and exit freely with access to technology not restricted (Martin, 2000; Mankiw, 1990). Contestable markets that are efficient then results in firms’ response to prices that have been set and earn same profit margins similar to a situation of perfect market competition. This further implies that an oligopoly market can achieve market efficiency in terms of production and allocative efficiency irrespective of the number of players in the market. 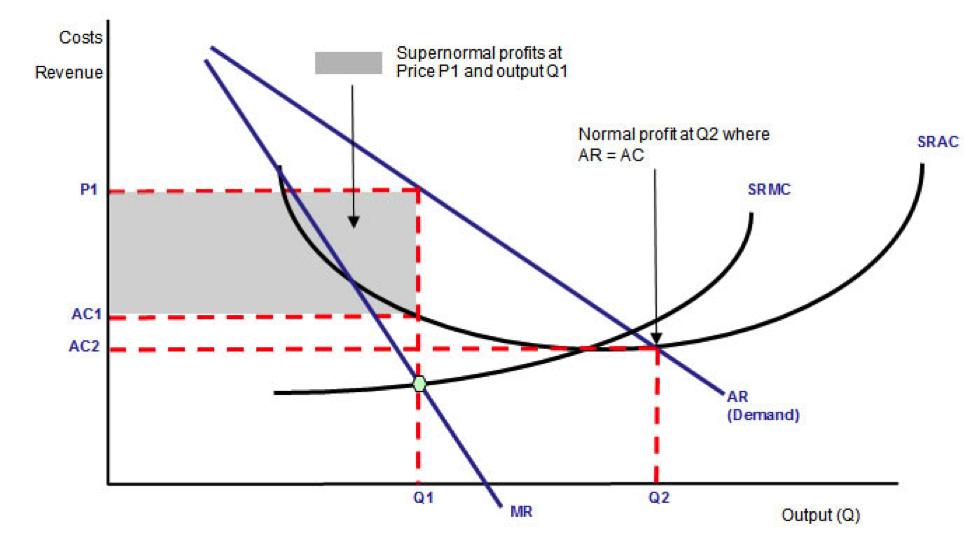 Source: Web image be specific of your source

N/B: Figure 1 above shows that at quantity Q1 existing firms earn supernormal profits at price P1 but when output shifts to quantity Q2 due to new entrants, firms earn normal profits where AR=AC. This demonstrates the power of contestable markets in enhancing market efficiency.

Moreover, perfect contestable markets brings about pressure on prices which pushes prices down affecting supernormal profits being earned by the exiting players. But, in oligopoly markets, supernormal profits acts as a signal for other players to enter the market because sunk costs and barriers to entry are absent leading to a reduction in the supernormal profits which results from increased production of goods. May be, the invisible hand as described by Adam Smith takes effect where resources are allocated equitably, ineffiency reduced and prices adjust as per market forces (Griffiths and Wall, 2011; Carbaugh, 2006). In addition, the existing players in an oligopolistic market who have been producing goods and services at high costs which makes them charge high prices, the new entrants bring in much needed competition which ends up rectifying the market failure. The supernormal profits are slashed and normal profits sets in making production efficient in terms of allocation and the high costs are reduced drastically leading to an oligopoly market that allows production to be efficient. Market efficiency is then achieved. More importantly, normal profits are earned when an equilibrium between Average Costs (AC) and Average Revenue (AR) and lower prices with a high outputs leads to a surplus to the extent that the some players opt out of the market.

Thus, it can be seen that contestable markets can bring about many benefits both to the firms and customers or society as a whole but there are conditions which must be fulfilled in order for a contestable market to exist and include absence of market entry barriers, absence of sunk costs, information about a market is perfect and available to all players, technology and skilled labor can be accessed easily, absence of customer loyalties, Governments are allowed to intervene in a market through regulations, subsidies, taxes etc.

Oligopoly markets experience tension between cooperating with others and pursuing self-interests and if all firms or suppliers reduce their outputs or hoard them, prices increase. Hence, this study agrees with the statement that contestable markets brings about market efficiency in oligopolistic markets to the extent the entry and exist is free with no conditions whatsoever.

Baumol, W.J., (1982). Contestable Markets: An Uprising in the Theory of Industry Structure. The American Economic Review, Vol. 72, No. 1, pp. 1-15. Available online at http://econ.ucdenver.edu/beckman/research/readings/baumol-contestable.pdf. Accessed on 11.01.2015