The current age firms and nations are living in is marred with advances in technology which has made policy makers and practitioners in national economies to establish the existing links between use of advanced technology and economic growth or development (Sachs and McArthur, 2002). The implication is that innovation as a result of technological advancement is the greatest driver of economic growth but realizing this much needed growth in an economy in a country like the UK requires a complex and well defined social systems and institutions (Everett et al., 2010; Sachs and McArthur, 2002). Moreover, sustainable growth in the economy leads to increased levels of employment, increased disposable incomes, increased living standards and enhanced investment levels. In addition, economic growth results from a combination various capital types namely capital for production like machines; skills and knowledge related to human capital; capital from natural endowment and social capital that come as a result of good social structures.

Economic change, growth and its understanding stretches back to Adam Smith who popularized the concept of division of labor and increased productivity as a result of specialization, role played by market institutions and how to increase output per individual (Smith 1981; Sachs and McArthur, 2002). But such economist ignored the role of technology in enhancing economic growth. Thus, modern economic thinking focuses on knowledge and technology as opposed to traditional economics which focused more on factors of production of land, labor, basic capital, materials and entrepreneurship (OECD, 1996). Modern firms and nations like the UK are incorporating technology and knowledge in their production functions since they enhance production and output. Moreover, the new technologies bring about increasing returns hence will contribute to long-term economic growth. When extra capital is pumped to an economy, returns tend to diminish but new technology changes the equation by bringing about efficiency leading to increased returns (Elwell, 2006).

OECD countries like the UK depend on knowledge and technology in production and distribution and this enhances efficiency, leads to increased outputs, increases employment, increased exports (OECD give an estimate of 20-25% increase), (OECD, 1996). According to OECD (1996), the service sectors like communications, education etc. which have employed new technology have grown very fast and estimates that over 50% of GDP in major economies in the OECD are based on technology and knowledge. For example, the UKs exports grew from 16.4% to 22.2% when 1970 is compared to 1994. The figures have gone up in the later years since technology has continued to expand. Moreover, many countries are moving their resources and directing their efforts towards goods and services that are high technology intensive as opposed to labor intensive for example the ICT (computers and accessories).

In addition, firms and countries are using technology in investments that are intangible like R&D, training and developing people, software and expertise. For example investment in R&D has enhanced growth of GDP countries by approximately 2.3% and investment in education and technical knowhow is on the rise (OECD, 1996). This implies that many nations are taking investments in technology seriously which includes investment in human capital and R&D since they contribute a lot towards economic growth (increased output, increased exports, enhance efficiency etc.). 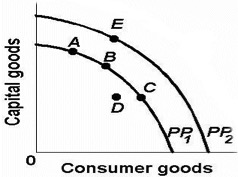 Figure 1 above shows that as an economy grows, the production possibility grows and shifts from PP1 to PP2. This shows the effect of technology which makes resources to be more productive. The production possibilities lead to further increase in economic growth in the long-term (see figure 2 below showing the area of economic growth shown by a shift of the curve from AB to CD). 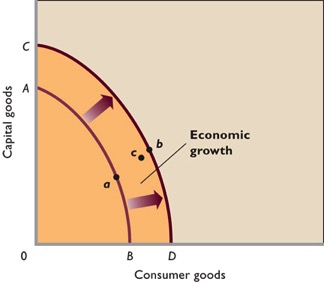 Advances in technology leads to an increase marginal capital productivity via educating the labor force (skilled labor), investing in R&D and changes to structures of management and organization of work. More importantly, it is the engine that drives sustainable economic growth (Elwell, 2006; Keller, 2004).More importantly, new technology offsets the effect of diminishing marginal returns which affects production affecting sustainability. A country which relies on capital alone eventually lags behind in economic growth and technology advancement and its effect on long-term economic growth can be looked at as follows: technology used in harnessing natural resources; marginal capital productivity and efficiency is increased (capital becomes more profitable and productive); saves time since technogical advancement leads to producing goods at the least time possible; enhances specialization; enhances quality and standardization of products and packaging; industries expand; enhances efficiency and productivity of labor; technology has made the world to be a global village enhancing international trade; technology has improved research especially in science; enhanced GDP due to increased output and virtually most sectors in an economy develop due to enhanced technology.

Innovation as a result of advances in technology which brings about sustainable development in the economy does not just happen but requires a concerted effort and interconnectedness between institutions non-market and market. Governments like the UK require a clear strategy on innovation if activities related to innovation are to be realized. Economic growth is caused by availability of additional resources, having better resource capabilities and more importantly better technology.

Smith, A., (1981). An Inquiry into the Nature and Causes ofthe Wealth of Nations. Indianapolis: Liberty Press.